Normally, in screenwriting the gurus say that story begins with character or possibly structure, but what I learned today in my nifty fiction workshop is that novels begin with setting, and that location begets character not the other way around. Whodduh thunk it? Now, in the land of common sense this might seem to be obvious. You can’t have a person existing in a vacuum, and thus it would be a logical assumption to make that they have to have ground under their feet before you can plunk them down and set them off running on their journey. But somehow I missed that.

On the bright side, my background as both a screenwriter and a visual artist puts me in a good position to come up with proper settings for characters as fast as you can say… 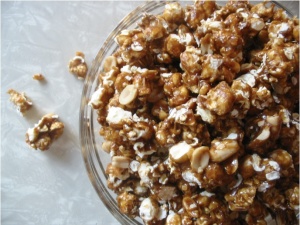 So, I’m working on my first novel, and surprise surprise, I’m basing it on an idea that was originally for a screenplay. The thing is, I know all the secondary locations, but not where the meat of the story will be set. Worse still is that all I can think about is this 7 ft. mixed media installation that I did a few years back during my undergrad days at Sarah Lawrence. It looked like this… 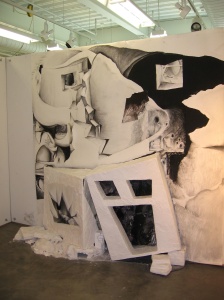 Yeah, get a load of that one.

The most interesting thing about this piece, which you can’t see from here, is that in the very far right corner, right where the tunnel meets the plaster outcropping is a faint but distinct silhouette of a man in a tuxedo offering a woman in a Victorian bustle a rose. Well, that, and that this piece came to represent what my brain must look like when I’m suffering writer’s block. As I was telling a friend earlier this evening, I’m not sure how or when it was that I began to conflate the issue of true love with my work as an artist, but there it is. Plain as day for all to see.

Okay, okay, in typical Holly fashion this may all seem very tangential, but I actually have a point to make. I think. The point being that the novel I’m writing is about Cupid, the god of Love, and a young female demi-god who is coming in with the aim to restructure Love as it have been done through the ages (very much an “Up In the Air” knock-off). So what I’m thinking is… do Cupid and the demi-god need to spend the majority of their journey in a desolate limbo place like my brain on writer’s block? Obvi, they spend some time on Olympus, and some time on Earth, but as far as each one of them going through a self-as-artist self-discovery journey, do they need to be in a place that only exists within the human soul? Because, if the story is about Love, where else could it be set without it being about love in, say, New York City, or Bangladesh? This story is not about Love in a place, it’s about Love within the human condition. So that makes sense.

But. But. Okay, so there’s this fantastical place that may or may not exist within ourselves. The next task is how do I ground that in sights and sounds and smells and tastes and PLACES that are familiar to us all? This is where I ask ya’ll for your help. If you have an inner-life what does it look like? Or does it not matter? Should I just write what my inner-life looks like and assume that people will be able to relate because anyone who would pick up a copy of my book will have a rich inner-life and can just imagine what it would be like for them?

While you think about that, here’s a beautiful video to watch. It’s by William Kentridge, and is a stop-motion video of him erasing and drawing over the same images. Words cannot describe.

P.S. I swear by next week I will be offering more information rather than asking a bunch of unanswerable questions. In the meantime, enjoy the video.

I'm a visual writer and teacher currently getting my MFA in Writing for the Screen & Stage at Northwestern University. Sarah Lawrence undergrad. Writer for movies, TV, theater, and literature.